Today I take a closer look at the T26 "A" and T26 "B" from Baker Company. As far as I can tell they are not in production at the moment, I got them as part of the hapless Winter War Kickstarter (still waiting for most of my stuff after just 3 years...). 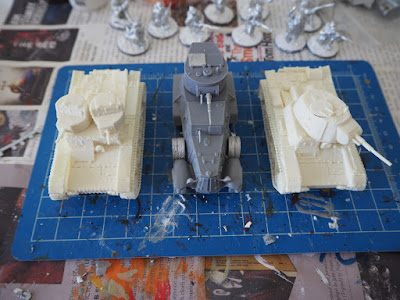 The T26 was one of the many "improved" Vickers 6-ton which popped up all across Europe in the 1930s - in reality, most of them were blatant local copies of the original design. The T26 came in two main flavors, single turret with 37mm or 45mm gun (sometimes called "B") and twin-turret with wtwo machine guns (variant "A"). There were some attempts to build versions armed with 76mm artillery pieces, but those didn't develop past prototype stage. Hundreds of T26 were shipped to support the Republicans, and a couple were used at Khalkin Gol.
Large numbers were used during the Winter War against Finland, were the T26 proved to be already obsolete. The Finnish anti-tank rifles couldd penetrate its armor at decent ranges and the tank units were poorly coordinated with infantry which led to avoidable losses.
When the German invasion began they faced thousands of T26, who were in most places slaughtered by Panzer III and IVs, but especially by the Luftwaffe. Several hundred were lost in the first months of Operation Barbarossa.
Although basically already outdated at the start of the war, they were used until 1945 against the Japanese in Manchuria and at the Leningrad front.

The Baker Company models are not very high quality. Details are sufficient, but the material is rather brittle (this might be partly due to a couple of years in storage, too) and prone to break. Their is also quite a lot of excess material on the back of the tracks that impairs fitting. In other spots it looks like miscast surfaces were sanded down rather roughly. 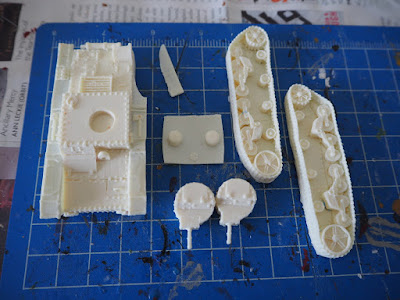 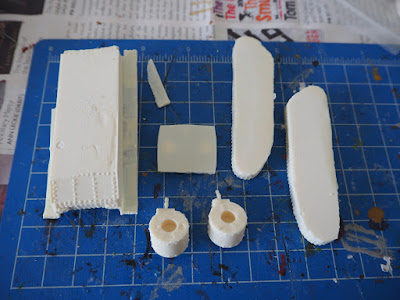 The base platee for teh twin turrets was pretty contorted, but due to its thinness I could fix that with some hot water. Nevertheless, the hull for this versions has bolts on the top which need to be removed to make the base fit - I don't know why that was designed in this way... 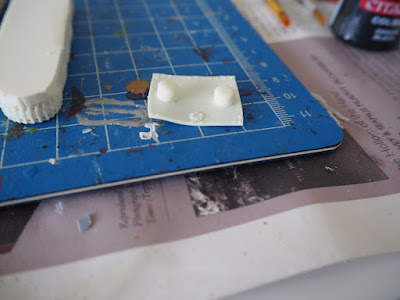 The single turret variant suffers from the same deficiencies: 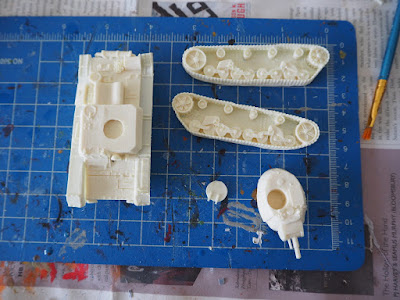 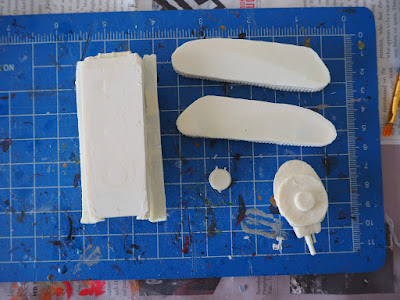 Assembled they son't look too bad, but you can see the amount of filler that was necessary: 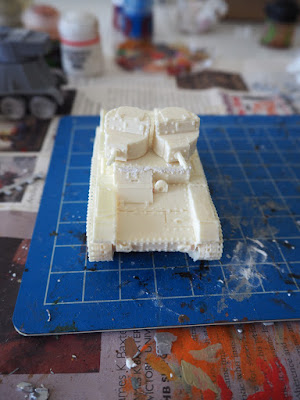 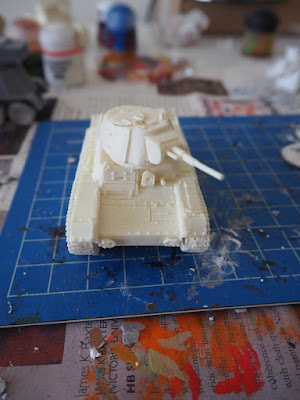 Those are rather small vehicles: 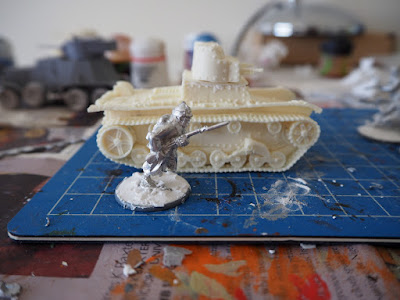 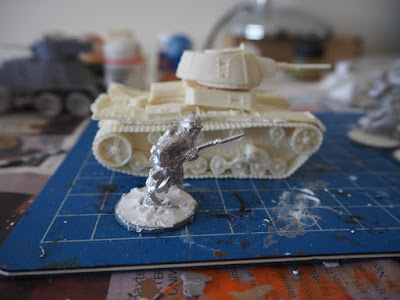 I'm a bit torn on these ones. On one hand, they are just not nice-looking models and have their share of issues. On the other hand, I got them like really, really cheap and they do look the part once they are assembled and painted.
To me, it comes down to price, which I cannot judge because they are not available at the moment (and most likely never will be again). During the Kickstarter they were £22, which is obviously a joke when you can get a supposedly much better quality T26 for less from Warlord Games...
Yeah, so if you ever come across one of those, either pick it up really cheap or giv it a pass - there is  a lot of nicer stuff out there.

PS: We played our Barbarossa event last Saturday and it was a blast - I only have pictures from my phone but I will post them in the next days. And as soon as I can find my camera I'll write the review of the much nicer and cooler Heer46 B-4 howitzer!

PPS: I just ordered a Komsomolets armored tractor and a Zis 6 truck :D
Posted by Tabletop Fix at 10:42 PM 1 comment: 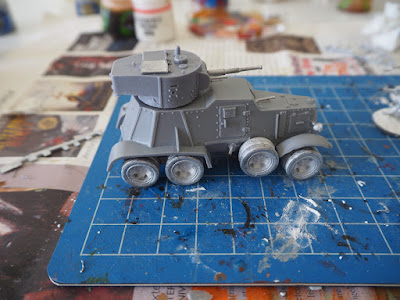 The Broneavtomobil 6, or BA-6, was a slightly upgraded version of the BA-3 armored car. It is based on the three-axle GAZ-AAA chassis and entered service in 1936. The BA-6 featured the same turret as the BT-5 and T-26 m 1933, a conical design housing a 45mm 20-K anti-tank gun and a co-axial 7.65 mm DT machine gun. A second machine gun was mounted at the front. The design was severely under motorized with a meager 40 hp engine for a 5ton vehicle, and it lacked maneuverability off-road. Top speed (55 km/h) and operational range (200 km) were also significantly less than those of its German counterparts.

It was used in the Spanish Civil War and served in the early Soviet campaigns of WW2 against the Japanese and Finns. The BA-6 was still in used when Nazi Germany launched Operation Barbarossa, but it was quickly replaced by the T-60 and T-70 tanks.

The Warlord Games kit comes as a combination of resin hull and turret and metal parts. I was slightly concerned about that because it can sometimes cause trouble during assembly. Luckily,  Warlord Games used a lot of pegs and holes and building the vehicle was quite enjoyable. 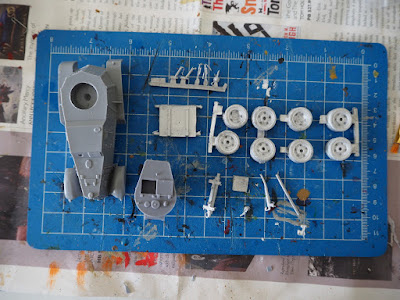 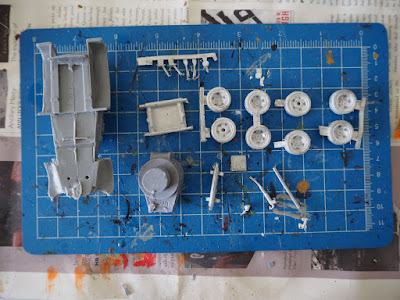 The details are very good, and both resin and metal parts are casts in good quality. As always, the exact alignment of the wheels is a bit tricky, but I have seen worse. The only issue was the axle for the two spare tires - it is too short... 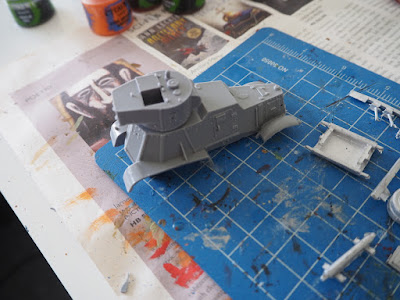 Overall a kit that satisfies all expectations. My only minor criticism is the lack of any extras like stowage, crew or decals, but those are rarely included in this type of model (although I think that is what turns a good kit into a great one). 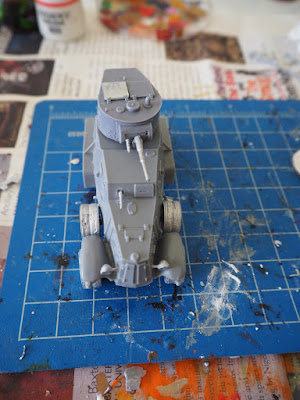 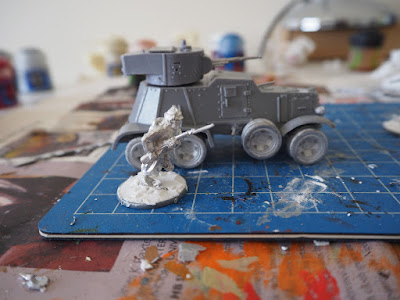 All in all, the BA-6 is a kit from the upper third of the scale. It is easy to build, well detailed and a good representation of the original.
Posted by Tabletop Fix at 11:21 PM 1 comment: