I just finished the World War 3 novel "Ghost Fleet" by P.W. Singer and August Cole and thought I might share my thoughts with you. 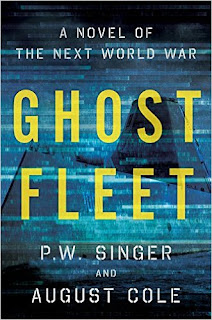 The Story of Ghost Fleet is set about 30 years in the future and pretty simple: After a coup that topples over the Communist Party in China, the new technocrat regime decides that it is their time to become the dominant world power. In a surprise strike the PLA invades Hawai'i and defeats the US military through deception and sabotage. Basically, they sneaked backdoors into some of the microchips they sold the rest of the world, and suddenly all your high-tech gimmicks are not actually doing what they are supposed to do.

The main set-piece of the story is the USS Zumwalt, the only completed and then prematurely retired US "stealth" ship, and there is another storyline about the occupation and resistance on Hawai'i. 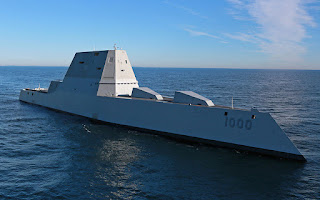 I knew P.W. Singer from his very good non-fictional "Wired for War" book about drone warfare and was quite surprised when I found this novel with his name on it. So it is no surprise that this book heavily features autonomous robots and a lot of technology DARPA dreamed up. And while the action feels right and mostly well-paced, the narrative is kinda worn out. Nobody will be surprised how it all ends, and who dies and who lives. It seems to be a movement in this genre to move away from the, let"s say "holistic", style of Tom Clancy (covering everything from the commander in chief to diplomats to boots on the ground) to a more cinematic narrative. And while David Suarez largely succeeds in this (see Kill Decision), Singer and Cole deliver a mostly uninspired story.
At this point I have to mention some not very well crafted pop culture references and some plot points that seem to be attempts at some kind of comic relief, but they don't work very well (but to be fair, this part of the story gave me the best "Oh no they didn't!" moment in the whole book).

Another slightly annoying thing is that a lot (and I mean A LOT!) of events are mentioned in the book, but never explained... Well, while this is usually no big deal and just a way to make the fictional world more real, it becomes somewhat annoying in this book because I felt like I am missing pieces of history that led to the starting point of the book. Even major events like the break-up of NATO is just fed to the reader as a matter of fact without any further explanation, and that happens within the timeframe of the story!
The lack of political "bigger picture" story also makes the end somewhat disappointing, but I don't want to discuss this as it would be a major spoiler.

So this book is no Red Storm Rising (for me still the benchmark for a WW3 novel), but it is also not a piece of pure Cold War propaganda like Team Yankee. The setting, although feeling somehow familiar from mostly FPS video games, is fresh enough to make this book worth reading. I got through it in just over a week (which is tremendously fast for me at the moment), so I guess the story sucks you in quite good.

All in all, it was an interesting read, informative and entertaining. If you are interested in near future warfare and can forgive the lack of an elaborate story and characters you should give it a try.
Posted by Tabletop Fix at 6:55 PM No comments:

One thing I did during my vacation was sending a package to myself - 20kg of toys that were in storage at my parents place. Today, it finally arrived! 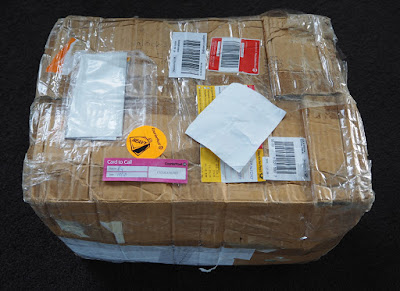 The box was pretty beaten, but it travelled around the world. I was just hoping I packed everything reasonably safe... 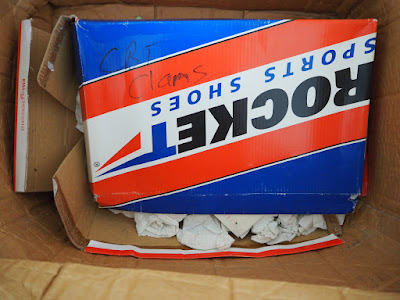 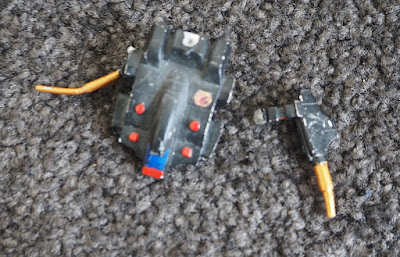 Man down! Man down!

But luckily most of it was okay. 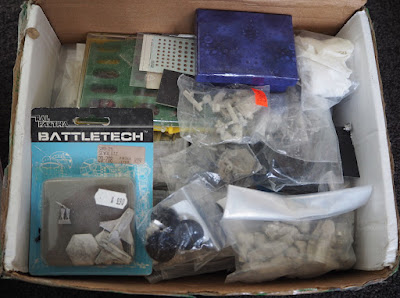 So what was inside? For example my 6mm Modern IDF: 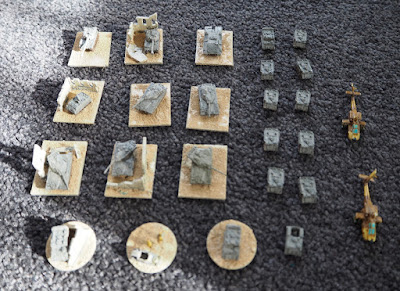 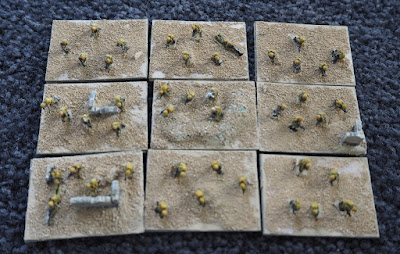 And some half-done Germans: 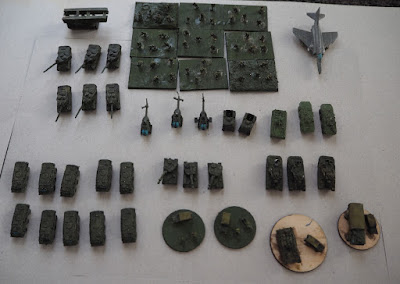 Plus reinforcements for my BAOR and Syrians: 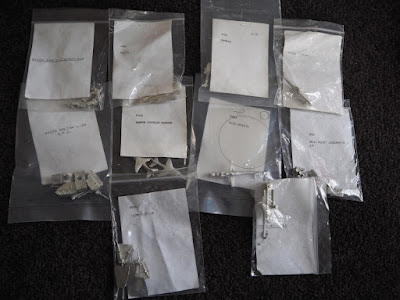 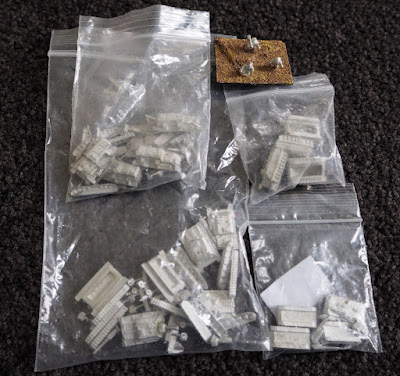 One and a half 15mm Mighty Armies forces: 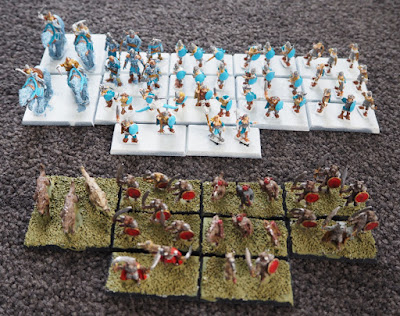 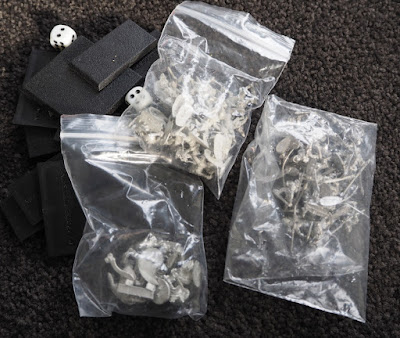 A 15mm Walker from Micropanzer Wargames, long time oop and awful to assemble: 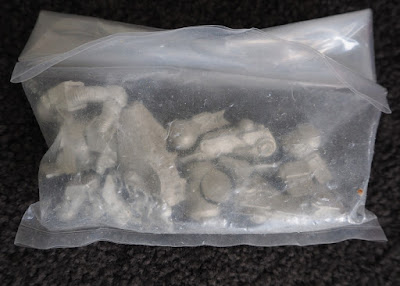 But the main part of it was BattleTech miniatures. I bought my first BattleTech novel, Way of the Clans, when I was 14, and I was hooked. Got the Mechs! box as a present soon after, but never actually played the game until I was 17. But then, BattleTech was HUGE in my circle of friends, especially during my last years of school and first years of study. We played an ongoing campaign with a mercenary unit, and back in the day there was heaps of organized play throuch MechForce and communities like Lordprotector and Batchall. I still own hundreds of BattlecTech miniatures, and maybe half of them are now back here with me.

Sadly, they suffered the most during transit...

First we have the mangled remains of my Clan Hell's Horse Omega Keshik: 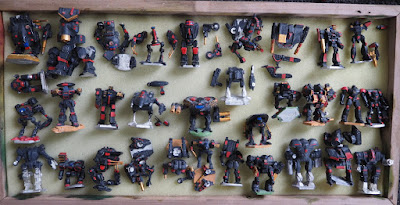 The Hell's Horses always have been my favorite clan, I loved their schism between Crusaders and Warden and I loved their use of second line Mechs beside OmniMechs and their combined arms tactics. They were like one step smarter than the average clanner.

Well, if you are looking for a game with even more ridiculous tank designs than 40K, look no further! Also, I have way more ProtoMechs than I remember...

I also have a bunch of rather boring Clan Wolf machines: 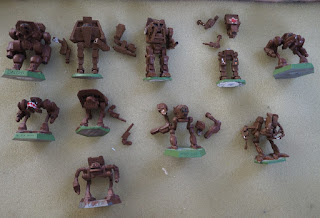 Including a Fenris with this quite presentable free-hand logo I did: 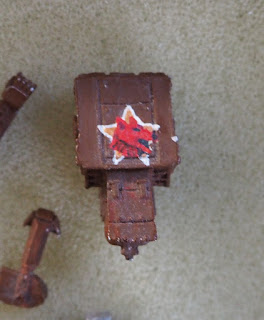 And a bunch of unpainted Clan Mechs, including 3 Dire Wolves :) 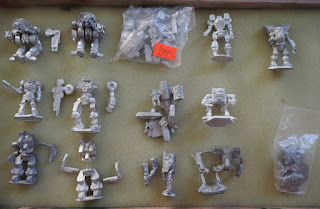 One of them is a Widowmaker, produced by the MechForce UK. But I suspect mine is a re-cast.

Beside this, I also created my own mercenary outfit, with the rather unoriginal name of Ronin. They were a bunch of soldiers who lost their units, families and/or homeworld in the Clan invasion. The core was the remnants of an FRR unit which teamed up with a beaten up Steiner mercenary lance and went from there. Yepp, I had a very detailed background for this unit.
They adapted the same organisation as the clans with 5 Mechs per unit, and employed an "open" company structure, meaning that lances were put together into comapanies according to teh task at hand.

This is the command lance:

I was not very skilled when I painted those, and I think they deserve a new (hopefully better) paint job. 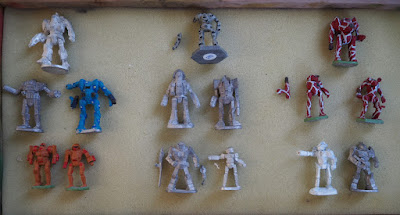 The Thug is a bit of a stretch for a mercenary outfit in 3052, but I am sure there was a very good story for it being there.

Talking about stretches, of course they have a LAM leading their scout lance! 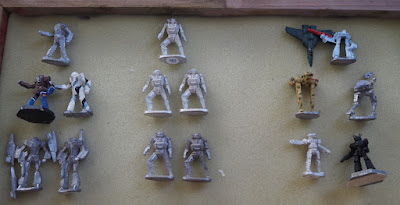 The other two light lances are more combat oriented, with an ambush lance of 5 Javelins, well, technically three JVN-10N Javelins and two JVN-10F Fire Javelins, and a Hunter/Killer lance with two Phoenix Hawks and three Valkyries.

More specialized units come in form of an urban combat lance, as heavy as possible while being jump-capable and  painted brightly red for easy identification in the chaos of close quarter combat, a fire support lance and the pride of my collection, the Guard lance with an Unseen Marauder II, two Unseen Marauders and an Unseen metal Warhammer (the painted Warhammer is plastic)! 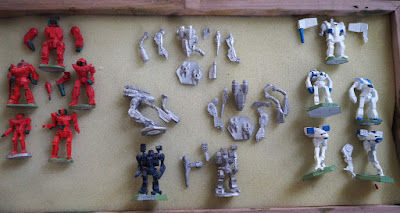 Later, I expanded the Ronin to a full bataillon with Mechs from the newer TROs. Here are some of them, although each lance is missing at least one member - I guess they stayed behind when I packed the box... 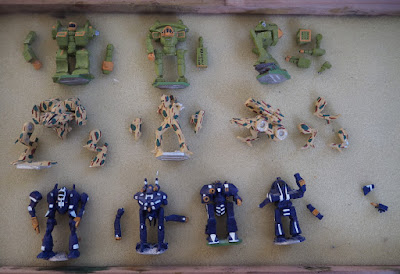 And some more unaligned Mechs: 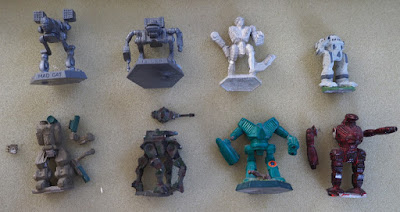 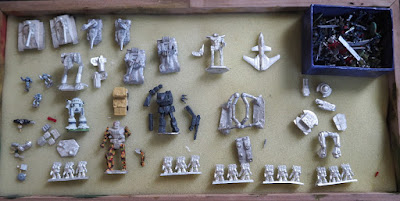 I hope you enjoyed this little trip through my hobby history!
And there is still another smaller box sitting here waiting to be unpacked. :)
Posted by Tabletop Fix at 1:40 AM 1 comment: