Hello,
as you might know I recently moved to a new place. That was the main reason why I haven't done a lot of hobby stuff lately, but now that we are settled in to our new home I have to sort out my hobby room! 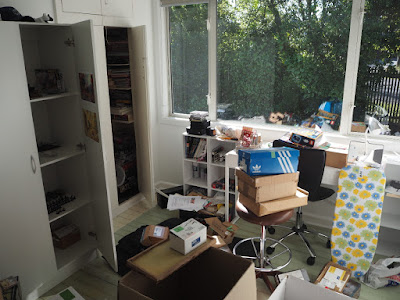 (Well, I have to share it with the wife's sewing machine and knitting supplies, but that's a small price to pay, isn't it?)

I thought that would be a good opportunity to show some of my collection, although very little of it is actually finished.

As you can see there is a lot to do, I need to paint/repair a lot of the 8th Army vehicles, and the Soviets should get some reinforcements soon since we are going to have a big Bolt Action battle again at the start of December. In the background you can just make out a GAZ AA, Komsomolet and some Black Tree Design infantry.
Well, and the Hungarians and Germans are not even half painted... One day I will finish the 44M TAS and Rohamloeveg in the fictitious ambush camo pattern I want.

I also plan to venture into 1/35th territory: 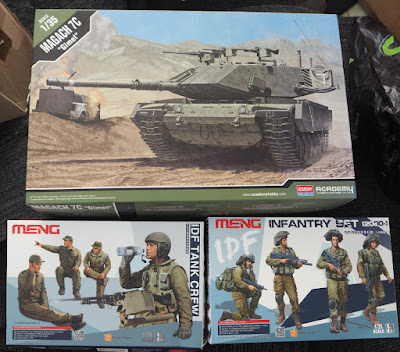 I love IDF armor, and the Meng Production figures are awesome! I hope I won't get too annoyed by the tracks with multiple pieces per link...

I also decided to expand my 6mm Germans for Blitzkrieg Commander:

I guess a fine drill and some steel wire are in demand to fix these barrels... Anyway, I am planning to paint those units and some infantry as part of a P500 on the German Tabletopwelt forum. This is a nifty little event they have every year in which you pledge to paint a full army with each 500 points block being finished in 6 weeks. It's a great way to get feedback and motivation, and I think this kind of "pressure" is very good to get me doing something. And since one of those Jagdtigers is already worth 280 points, I also decided to double the points per block to 1000. More about this project soon, it starts on November 1st!
Posted by Tabletop Fix at 8:52 PM No comments: